Rehabilitation of a multi-storey housing building


The Lucerne Tribschenquartier is situated in the direct vicinity of the railway station and the Vierwaldstätter Lake. In the 19th Century, a continuation of the left-bank new town quarter was planned; however the railway construction and the location of the station isolated the quartier from the city centre and therefore slowed its development. Moreover, the vicinity of the railway tracks and the freight railway station encouraged the development of industry and small businesses. Increasing rural migration since 1990s and the pressure on the urban housing situation led to increased public interest in the centrally located quarter. Since then, the Tribschenquartier has experienced fundamental restructuring, which primarily involved orientation towards office and residential uses.

Central Park is a complex consisting of three residential towers that are arranged on a common, two-storey base with mixed uses. Like many examples of 1970s Swiss architecture, Central Park has tangible qualities even from today's perspective, but no longer fully reflects today's use requirements and falls far short of normal energy standards. For that reason, two of the towers were recently renovated. The third, on the corner of Tribschenstrasse and Werkhofstrasse, on which the current project focuses, is still in its original condition. (text from Semesterprogram 2016. Masters of Architecture Hochschule Luzern)

In order to meet the new housing demand for young people and middle class families, and in accordance with the heterogeneity of the quartier, a new collective housing typology is suggested. This solution completely differs from the existing two-flat per storey current arrangement: a collective kitchen is located every four rooms, allowing a much more flexible and densified room distribution – there can be either two four-room flats, four two-room flats or eight individual rooms functioning as a student housing -. Other collective uses such as the washing machines or media rooms are located in the mezzanine level.

From a structural point of view, two main decisions are made: first, not to alter the existing concrete wall structure – only partition walls are removed – and second, to add a new skin around the original tower in order to energetically update the building and, at the same time, offer new intermediate spaces. This second skin is built with a metallic structure which provides a light-weight solution that is supported on one side by the existing two-storey base pillars and on the other side by the original concrete slabs. Private rooms are defined as insulated spaces - they can be quickly acclimatized - and they are built with new partition walls made of wood panels, whereas the collective spaces keep the original concrete structure and are understood as "inertia spaces". 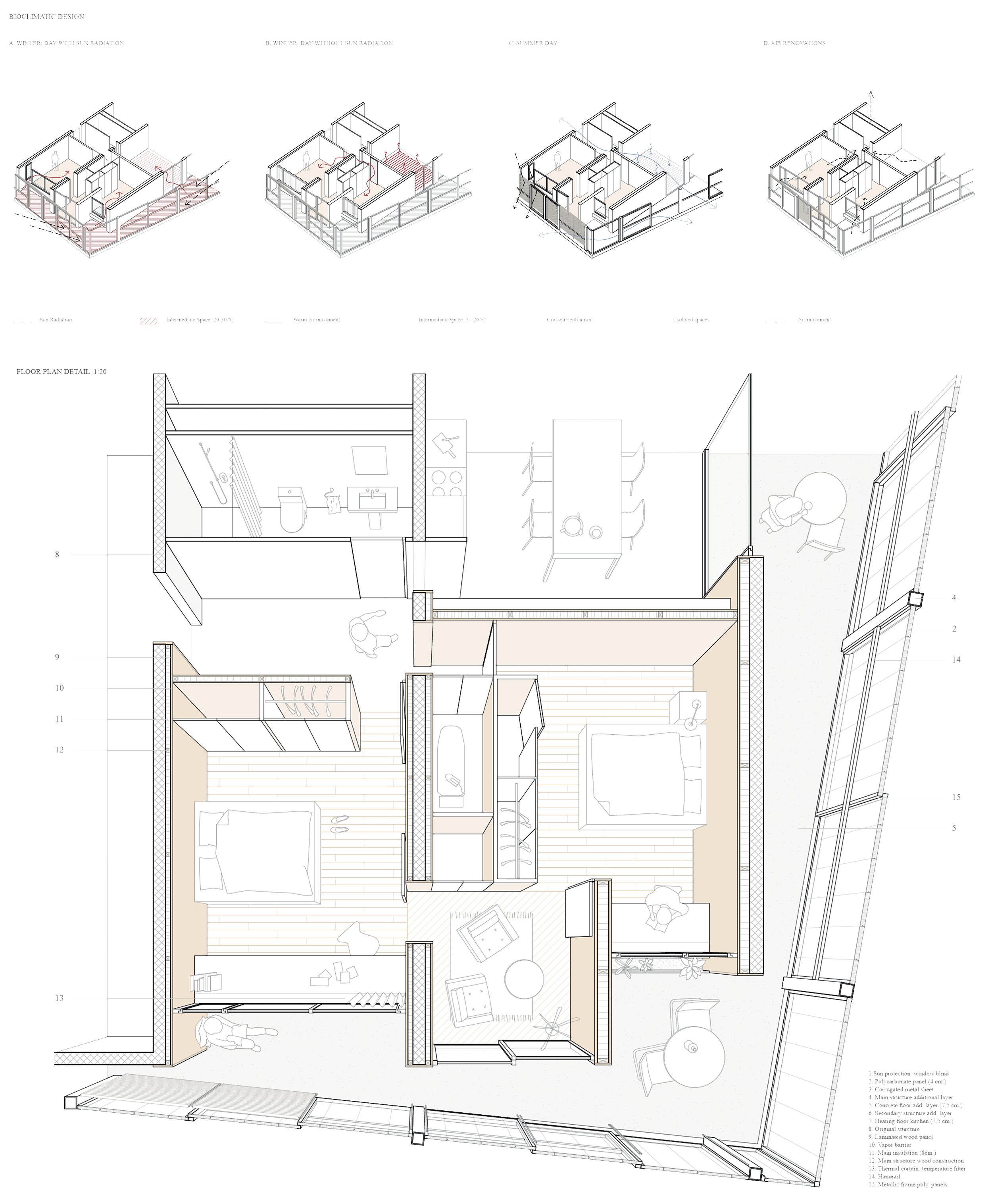 Energetically, the new skin works as a thermal cushion which reduces the temperature differences between exterior and interior, and therefore optimizes the use of energy of the building. In winter, the polycarbonate provides extra heat to the rooms thanks to the greenhouse effect. Moreover, air renovations are made through the intermediate space instead of the exterior and in this way energy losses are minimized. In summer, sun radiation is stopped using foldable blinds and, at the same time, the new steel slabs become a sunshade for the interior rooms. 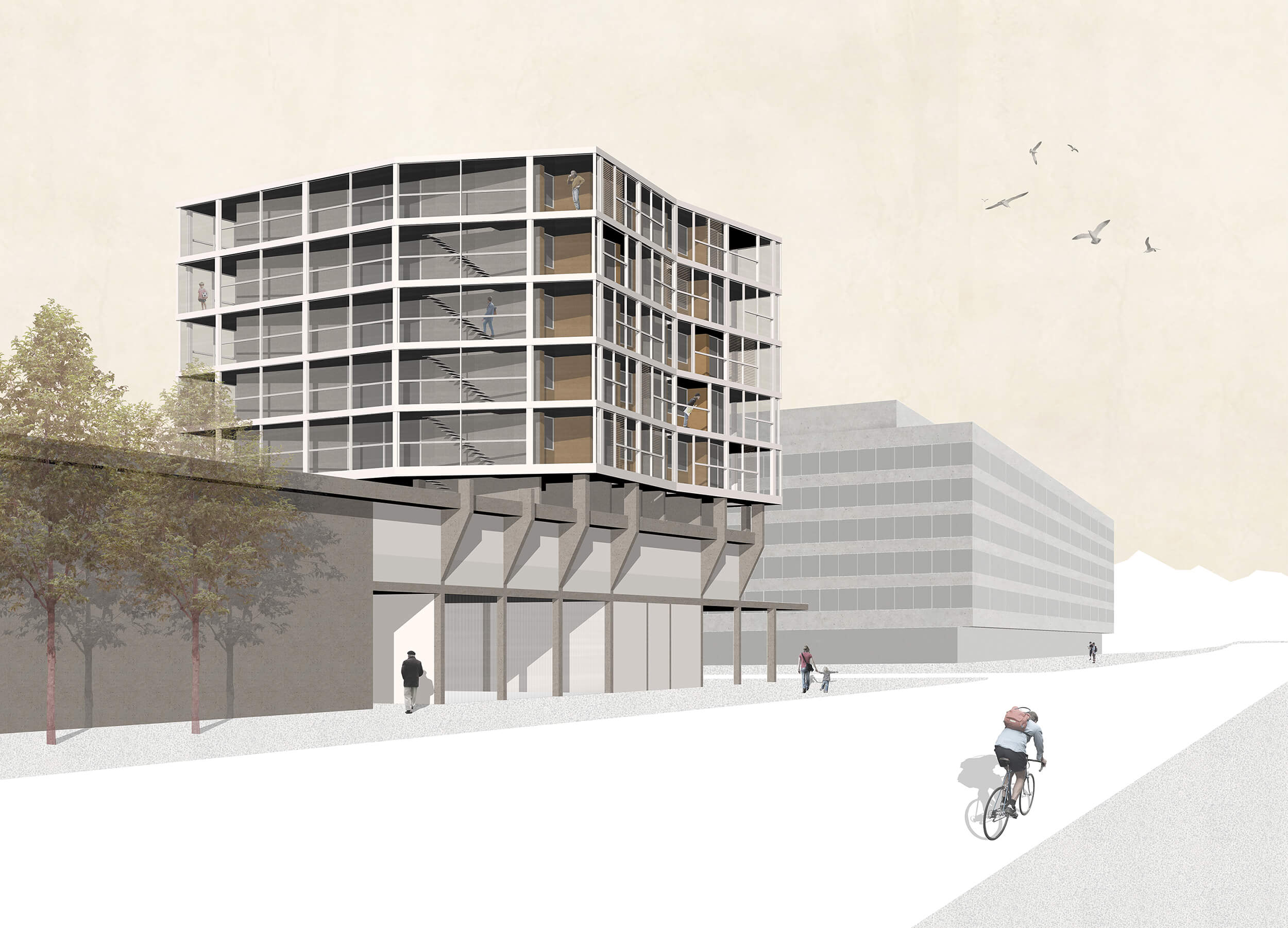